One of the drill’s targets will be resources, but don’t expect any gushers for a while. 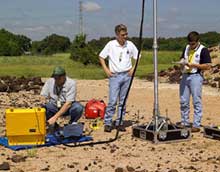 Read more about the Mars Yard.

The futuristic drilling rig under development at Johnson Space Center (JSC) is designed to be used on the Moon or on Mars. Its first target will be knowledge — geology and perhaps biology — of planetary bodies gathered from cores it will deliver. The resources it eventually will seek sound mundane, but will be vitally important. Water from beneath the surface of Mars is a possible example.

The drill is being tested in the Canadian Arctic — in conditions in some ways similar to Mars. The tests will continue through Oct. 3. The tests are being conducted at the Eureka Weather Station on Ellesmere Island in Canada’s Nunayut province, about 690 miles from the North Pole. Because it is designed for use on other planetary bodies, the drill has weight, size and power consumption limits, said Brian Derkowski, project engineer. Power consumption is about 100 watts, enough to illuminate a bright household light bulb. Its components are designed for minimum weight and size.  Because of the weight and volume constraints, it cannot, like traditional drilling rigs, use drill pipe or drilling mud. 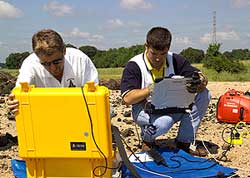 Image to left: Jeffrey A. George, manager of the Mars Drill Project, left, and Brian Derkowski, project engineer, focus on the control box of the drill during a test of setup procedures at Johnson Space Center’s Mars Yard, an area designed to resemble in some way the red planet’s surface. The Mars drill consists of a power source, a control box and the drill itself. The drill looks like a vertical pipe mounted on a support in the bottom of half a suitcase. A laptop is attached to the control box to record data.

The base is anchored to the surface and an electrically powered bit rotates beneath it. The pipe-like drill module follows the bit down, and is periodically pulled to the surface by its tether to remove the core and drill cuttings.
The Canadian tests, said JSC’s Jeffrey A. George, manager of the Mars Drill Project, are being undertaken in cooperation with NASA’s Ames Research Center in California and with faculty members from two Canadian institutions, McGill University in Montreal and the University of Toronto.

Baker Hughes Inc. of Houston, a company with a rich oil field history, is participating in the project under a Space Act Agreement with NASA. This is the second generation of the drill, said George. Initially the drill will be used to secure core samples for scientific study. “We believe the third or fourth generation will be ready for the Moon or Mars,” he said. It should ultimately be able to drill to depths of several hundred meters.

At Eureka, the drill is being used on sandstone and rock outcrops, and to drill through ice. The Canadian geologists will study retrieved core samples to further understanding of the geology and biology of the high Arctic. The JSC team is relatively small — four members are at Eureka. But, George said, it has gotten considerable support from other organizations at JSC and from Ames, as well as from Baker Hughes. Setup exercises with the drill were held recently at JSC. George believes the concept shows considerable promise. “It is,” he said, “a unique technology.”   *Text compliments of NASA